The Official Poster of the 75th Festival de Cannes 2022 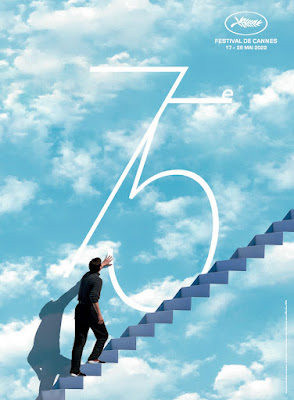 Each day is one step closer to the start of the Cannes Film Festival!

Yesterday, the official poster for the 75th Festival de Cannes was released. After the last couple of years due to the Covid19 pandemic with tight restrictions in place, this image now projects the feeling of positivity for the future.

Here, on the French Riviera, one can already sense more optimism in the air and that this festival will be more open and uplifting.

The festival organizers wanted to project an image of an upward journey to contemplate the past and move ahead towards the promise of a revival.

Over the decades, the Festival de Cannes has had to take on the world events in stride in hopes of capturing the imagination and providing some positive light.

Just like in 1939 and 1946, the festival is again asserting its strong conviction that art and cinema is where contemplation and the renewal of society unravel.

As stated in the rules of the festival, “The purpose of the Festival International du Film, in a spirit of friendship and universal cooperation, is to reveal and showcase quality films in the interest of the evolution of the art of cinematography.”

Coming to the Cannes Film Festival?! Connect with Experience The French Riviera for anything you may require.
Posted by Jameson Farn at 10:30 AM No comments:

It’s going to be a busy summer for entertainment this year in the Principality of Monaco!

With an already impressive list of celebrities headed this way this summer, two more new concerts have been added to the festival list by an announcement made by the Société des Bains de Mer in Monte-Carlo. 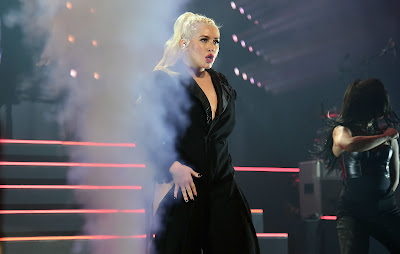 The Christina Aguilera tour will stop in Monaco on 29 July at the Salle des Etoiles featuring both a dinner and a show. Having sold more than 43 million records worldwide during her career, Christina Aguilera is listed as one of the top 100 greatest singers of all time by Rolling Stone magazine. 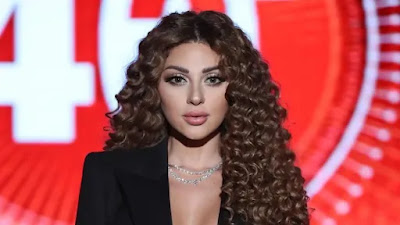 Lebanese star Myriam Fares will be coming to the Salle des Etoiles on 11 August. Known as the Queen of the Stage for her amazing performances, Myriam Fares was approached by Netflix to become the very first Arab artist to have her own documentary: Myriam Fares: The Journey, in which the artist reveals her daily life as an artist and a mother during the preparation for her new album. The Oriental dinner and show in Monaco will begin with a culinary feast before the spectacular concert.
August 11th at the Salle des Etoiles, doors open at 8:00 pm, concert begins at 10:30 pm. Tickets start at €360. 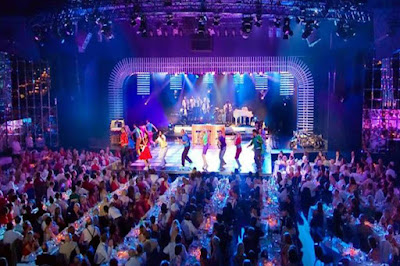 And more - Pink Martini and Imany with her show “Voodoo Cello” will perform at the Opera Garnier Monte-Carlo, Alicia Keys will be on the Place du Casino for the Monaco Red Cross Summer Concert and the Festival will continue at the Sporting Monte-Carlo with several other dinners and shows: Queen Machine Symphonic for Fight Aids Monaco Evening, followed by Black Eyed Peas, James Blunt, Simple Minds, Rita Ora and Gianna Nannini. 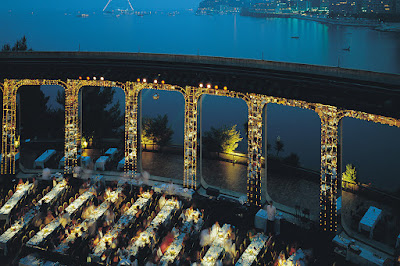 Tickets for the Monte-Carlo Summer Concert Festival 2022 can be found here: https://www.montecarlosbm.com/en/shows/monte-carlo-summer-festival
Posted by Jameson Farn at 3:34 PM No comments: 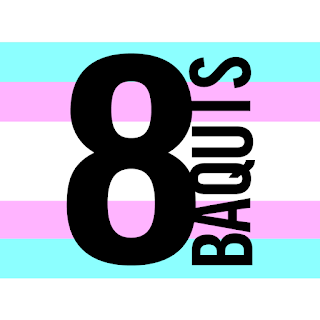 It’s been a long time coming but the city of Nice now has its own dedicated sexual health space for LGBTQIA+ people.

This is the result of an innovative collaboration between the Côte d'Azur LGBTQIA+ Center and the Alpes-Maritimes Department.

Although still considered a pilot project, 8 Baquis offers services every Friday from 11 am to 9 pm at the CEGIDD, at 8 avenue Baquis, in Nice.

Trained in LGBTQIA+ health and issues related to sexual health and HIV, these health professionals intervene at 8 Baquis and have a caring and inclusive approach with specialists in psychologists, gynecologists, addiction counselors, dermatology, infection specialists, proctologist, nurses, etc.

The aim is to provide consistent care and services at 8 Baquis in: HIV and STI screening and prevention, PrEP initiation and follow-up, post-exposure treatment delivery, Chemex support, gynecology for lesbian and trans people, hormonal follow-up for trans people, access to rights and support in the face of discrimination, workshops and debates on LGBTQIA+ health, vaccinations, teleconsultations, and community reception.
This is all done with the support of the ARS PACA, the CHU of Nice, the Region SUD, the Groupe SOS, ENIPSE, and the institutional support of GILEAD and VIIV Healthcare.
Posted by Jameson Farn at 12:57 PM No comments: 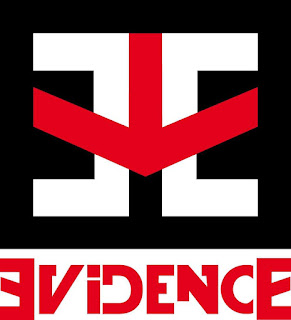 Wanna join a gang? A gang of lovers in the world of fetishism?

Well, there is an extraordinary group of men in the French Riviera just for those seeking something a little bit different off the beaten track. 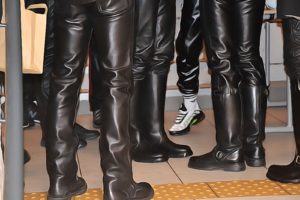 Evidence Fétiche is an association that was created on April 27, 2016, formed by three founding members who felt there was just such a need to be recognized in the region of the Provence-Alpes-Côte D'Azur in France for the world of fetishism in the LGBTQ world. 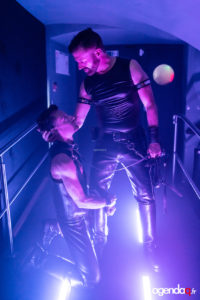 The association has been set up as a non-profit organization that produces various events, not only in the Cote d’Azur but throughout France and Europe to help build a strong base in the fight against homophobia and discrimination. 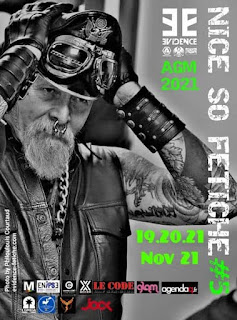 The events allow those interested a sense of freedom in themselves and their passions in the world of fetishism. 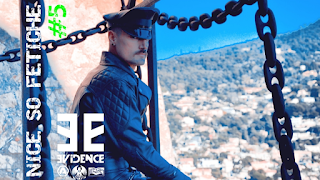 Honestly, these are some of the best parties around in the region and are highly anticipated when an announcement is made of an upcoming event. It doesn’t matter if you are new to the world of fetishism or legendary, everyone is accepted. 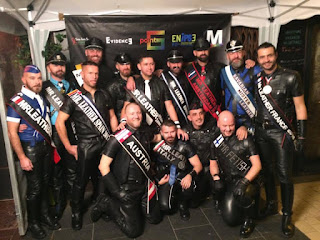 It’s a great way to discover new passions whether you want to partake or not by just simply being witness to what is happening around you at an event. The Evidence Fétiche events are generally at local cruising bars and LGBTQ nightclubs and are promoted usually a month before to give you time to plan.
These are also not full-on sex events, rather a camaraderie of people with similar interests. You will see the odd sexual hookup, literally or otherwise, or perhaps a flogging demonstration or a rubber/latex show as examples that all make for an interesting night out. 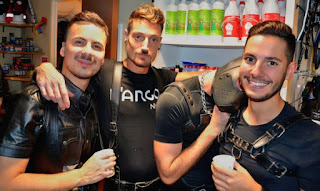 On the promotion of the events, there is usually a mention of the costs to get in if you are not a member. Which seems to range in price from 10 to 25 euros but the main thing to remember is their dress code is fully enforced.

Just showing up wearing shorts and a t-shirt won’t get you through the doors. Anything leather is will usually suffice, even if it is just a chest harness and jeans but going all out in your fetish gear is best. Think of it as your opportunity to wear something edgy that will impress a like-minded fetish crowd of men. 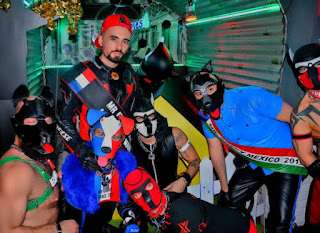 Joining Evidence Fétiche is a great way to support the efforts of the group made every day to keep the association going and for more events to be organized for your pleasure.
More information about Evidence Fétiche and obtaining a membership can be found on their website.

Photos courtesy of Evidence Fétiche.
Posted by Jameson Farn at 2:00 AM No comments: