Update On The Café de Paris Revitalization in Monte-Carlo Monaco 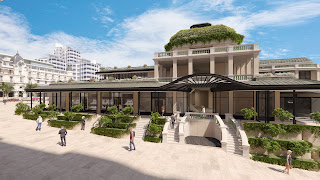 The renovation plans have been approved and the works, which are said to total €40 million, will be completed at the end of June next year. 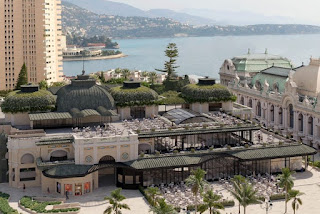 Architects Alexandre Giraldi and Alain-Charles Perrot are in charge of modernizing the Café de Paris. The aim is to maximize the potential of an iconic building, which honestly was starting to look very dated and not in keeping with the glam potential that Monte-Carlo usually likes to adhere to and showcase.

In the images shown at the press conference, it appears the building will thankfully keep to its Belle Epoque era architectural design, yet offer even more to the people it has already enticed for decades. 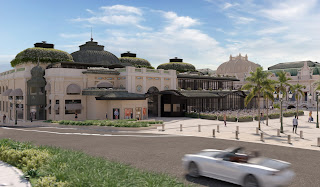 With this revitalization, the brasserie of the Café de Paris will be getting two additional floors, including a unique rooftop and a variety of boutiques. The Brasserie will extend onto two floors, with a partially glassed roof that will create a naturally lit ground floor bar. 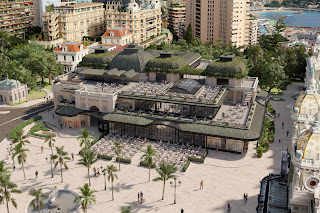 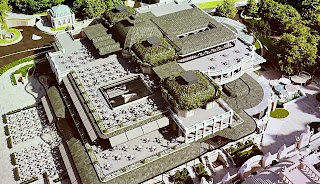 It has been said that there will be an additional 800㎡ dedicated to boutiques which will be accessible from Casino Square to Jardin des Spelugues. 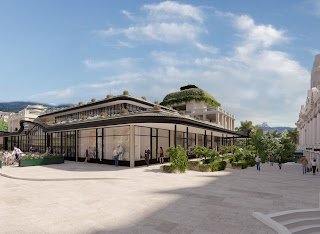 The revealing of this new design shows great respect to the Monte-Carlo Casino Square and once opened, will once again be a much-desired attraction for all to enjoy.

At this time, the Brasserie has moved to the Salle Empire for the duration of the work, while the lemonade terrace has been left undisturbed. The Café de Paris casino and the boutiques will also remain in place, although the SBM boutique has been moved to the Avenue de Monte-Carlo at this time.
Posted by Jameson Farn at 11:20 AM No comments: 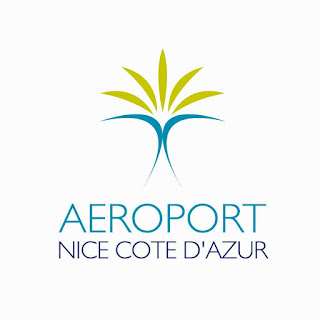 Here is something many of us not only in the French Riviera but worldwide have been waiting for, the Nice Côte d'Azur Airport reopens flights to over 100 destinations.
A sure sign that things are coming back to a new normal, with most of the remaining Covid19 restrictions being lifted as of March 14, 2022, now, the Nice Airport has announced they will open again to an almost complete capacity starting on March 27, 2022. 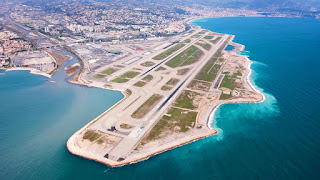 Just in time as people start to plan their summer vacations in the region and the rest of France.

Nice’s airport is considered the main hub of all flight activity in the region, and now, this means instead of all flights going through Terminal 2, now Terminal 1 at the airport will also soon be reopening its doors, with the best sanitary conditions in place. 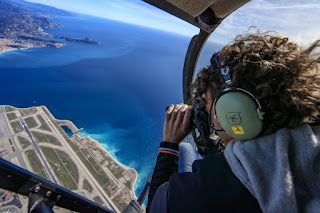 The airport will be offering 106 flights from 52 airlines (18 in France and 89 international flights, including 8 long-haul flights) to 41 different countries. This number is close to the number of pre-pandemic flights: Nice Côte d’Azur Airport offered a network of 121 destinations to 44 countries in the summer of 2019. 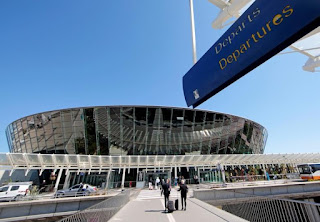 In addition to this news, more direct flights will also be available.

Many travelers have been eagerly awaiting long-haul flights, which will finally be making a comeback with eight direct connections. Air Canada and Air Transat will connect Nice to Montreal.

Kuwait Airways will fly to Kuwait, with a stop at Rome Fiumicino, and Emirates will fly directly to Dubai.

Delta Airlines will offer a daily flight to New York JFK, while La Compagnie and United Airlines will connect Nice to Newark daily. In addition, Gulf Air will operate at Nice for the first time and will open a route to Bahrain.

Five airlines will operate at Nice for the first time: Condor, to Düsseldorf and Frankfurt, Icelandair, to Reykjavik, Fly One, to Chisinau, United Airlines, which is adding a third long-haul flight to New York and Gulf Air. 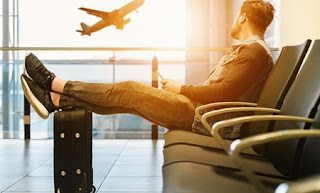 Nice Côte d’Azur will then be able to maintain its position as the second airport in France to offer long-haul seats, with 380,000 seats offered.

These new additions at the airport signify a welcome recovery from the pandemic, and that the French Riviera still stands as a much-desired travel destination.
Posted by Jameson Farn at 12:16 PM No comments: 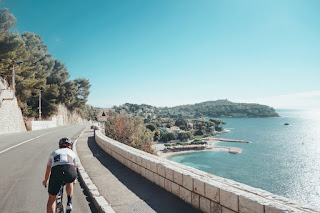 If there is one sport much beloved here in France, it’s cycling.

It’s not unusual any day of the year to see people on their own or as a small group heading out on their bikes whether it’s for leisure or in a competitive manner. 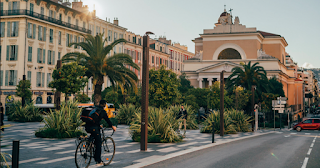 Almost a year ago, Nice Mayor Christian Estrosi presented his 2021-2026 Cycling Plan for the greater Nice Cote d’Azur area. This plan is targeted at seeing 10% of all local travel being done by bicycle, with an additional 160 kilometres of bike paths, with 75 of those kilometres being within the city of Nice alone along with increasing the number of parking spaces on both the streets and in parking garages for cyclists.

Finally, the plan is now to become a reality as 100,000 euros have been allocated to renovated and expand, with a promise of this sum to be renewed every year. 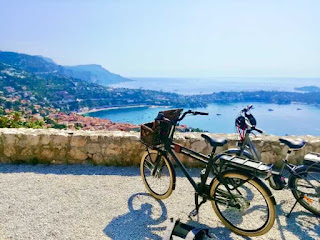 What is also interesting about this project is the new link between Nice and the Principality of Monaco. The route planned will use the largest possible number of kilometres so that those people cycling can get the most out of their workout and ride to each destination.

The links proposed have been researched and overall well determined as automatic counters have been clocking bike traffic since October of 2019, with 13 spots in Nice, three in Saint Laurent du Var, two in Cagnes-sur-Mer, with one each in Carros, Broc, and Gattieres. 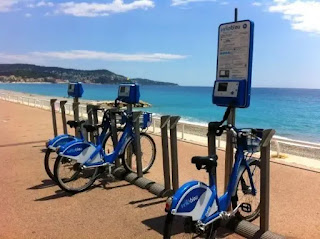 As anyone knows, the Promenade des Anglais at any time of the year is the busiest crossing point where on average 4000 daily crossings have been made since May 2020.

Monaco has been known for years for its eco-friendly, green movement, and cycling is at the top of the list when it comes to that alternative form of transportation.

The launch of the electric bike company, MonaBike a couple of years ago is indicative of such a shift with stations set up throughout the Principality. Or, another wonderful, alternative experience can be found with Velo Monaco. 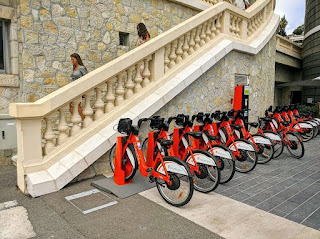 And in the city of Nice, Vélo bleu rental locations are also situated throughout the city for both tourists and locals to take advantage of as an alternative to cars or even public transit. 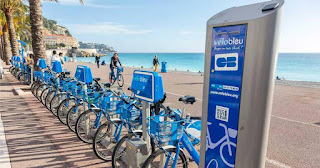 Little by little, cycling is becoming the more popular way around the region. Cycle safely.
Posted by Jameson Farn at 2:00 PM No comments: